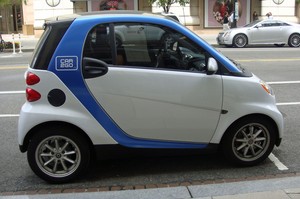 A Car2Go on Every Block

There is a new trend taking over Denver and it is one that you have probably seen throughout Downtown.  Car2Go has brought Denver a fleet of their smart cars in an effort to take the leading position as Denver’s go to Car Share Program.

They just might succeed, because compared with other car share programs they have something fairly unique to offer. They have engineered a system built around convenience. They seem to be doing it well.

Car sharing has taken several forms over the past few years as various companies have brought their model here to Denver. But similar to B-cycle the first models were built around the idea that car travelers would pick up and drop off their vehicles at a handy local station.

Car2Go has taken it one step better by removing the station entirely. Car2Go vehicles are simply left wherever you end up driving to. To pick up your Car2Go Vehicle you pull up their handy mobile application and find the closest vehicle. We did a little testing around the Denver neighborhoods and found tons of available vehicles within no more than a few blocks at any time.

We don’t know exactly how many new Car2Go vehicles have hit the ground here in Denver (if you know we’d love to find out) but there have to be a LOT!  From West Highland to Wash Park, Golden Triangle to Downtown…. There are many cars.

When we look at the cost of car sharing versus owning a traditional car the numbers start to make sense very quickly.  At just $0.38 per minute with a low max per hour of just $13.99 that makes it more affordable than the combined cost of a car payment, maintenance, gasoline, insurance, and all the other associated costs of car ownership.

And if you followed our earlier post on how to pick the best parking space you know that just adding a parking spot to your condo purchase could run anywhere from $15,000 to over $50,000.  You thought the car was expensive… you might end up paying more for the parking space.

Congratulations Denver, the new Car2Go sharing service might be the added ingredient to allow you to live car free.  With our rapidly growing light rail network, the new bus and shuttle lines, B-Cycle and bicycle lanes, and your own two feet the Car2Go addition  means there is a great support network for those who don’t have a car in Denver.

What’s next… we can’t wait to see.