A City on the Edge 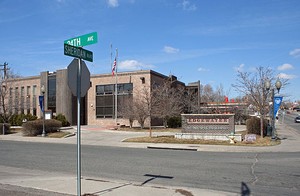 The small city of Edgewater is a city on the edge that, quite literally, sprung from the earth. When a farmer in 1861 named Thomas Sloan went to dig a well, he got a lot more than he had bargained for, 200 acres more. His entire farm went under. With the development of Fort Logan twenty years later, Edgewater’s main route, Sheridan Boulevard, brought traffic along the waterfront. As residents settled along Sheridan Boulevard and the water’s edge, a small development began to form.

The Foundation of a City

By 1889 Edgewater was on the map as a resort town when it opened Manhattan Beach on its northwest shore. Manhattan Beach was the largest amusement park west of the Mississippi. The construction of the West End Street Railroad the following year, which ran along 29th Avenue to Sheridan Boulevard, became a Denver artery. Eventually Elitch Gardens and Lakeside Amusement Park lead to the closure of Manhattan Beach in 1914. Even so, the foundation of a city was laid.

In 1904 Edgewater became a city. The muddy streets and saloons that were Edgewater were restructured into wooden boardwalks, the well was replaced by piped water, streets were named, and telephone and electric lines were laid.

Edgewater in the 1960s was blocked-in by the newly annexed cities of Wheat Ridge and Lakewood and its grand lake. But the 1970s saw Sheridan Boulevard in Edgewater’s city district lined with restaurants and shops. In the 1980s and 1990s, this meant that Edgewater’s less than 1 square mile area was to remain a quaint and tiny speck on the water’s edge with a view of the increasingly growing city of Denver beyond its waterfront.

Today, the quaintness of this little city is on the edge again. Its location is ideal. It is just outside of Denver’s city limits, reachable by several RTD routes and sandwiched by I-70 to the north and 6th Avenue to the south. It boasts the second largest park in Denver (only City Park is larger), and the only park with such a waterfront presence. With a 2 ½ mile paved shoreline hedged by trees and several parks, Edgewater is prone to become an attractive real estate hit.

New Era Group can find your place in a quaint and up-and-coming little gem, if you’re interested in becoming part of an emerging, hip town with an edge.