Coors Field Saves Face with a Facelift on Opening Day 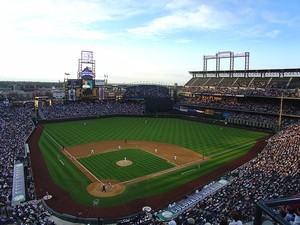 In 1846 the first baseball game was played; well, officially played in Hoboken New Jersey. The game hit off a trend that continued to grow with a young nation still getting its footing in the world. America was no super power in 1846, just a large country struggling to find its identity.

Through 1861 to 1865 the worst war ever fought by the US raged on as brother killed brother and still, baseball endured. In 1876 the National League was formed. That same year, John Hopkins University was founded, Alexander Bell was granted his patent for the telephone and makes his first phone call, Wyatt Earp serves under Marshal Larry Deger in Dodge City, New York City and San Francisco were connected by the Transcontinental Express, Mark Twain’s The Adventures of Tom Sawyer was published and Colorado became a state.

Opening Day is an integral part of America's fabric

To say Opening Day is simply another sport event is really undercutting the significance of a day that has borne the modernization of our nation. Our great, great grandparents were taking their kids to Opening Day. The only other entertainment that they would have gone to that is older is Ringling Bros. and Barnum & Bailey Circus.

This year, longtime St. Louis Cardinal Ozzie Smith and Budweiser petitioned the White House to make Opening Day a holiday. Sadly, it feels more like a PR stunt. But baseball, after all, is about making money.

And in all this history, the 21-year-old Rockies prepare to launch their home season opener on April 4 with their first game against Arizona. But it seems the Rockies may not fare much better than they did last year. Without Helton and with Dexter gone, it may not be a great year. Sales have certainly declined, so much so that this year nearly 3,000 seats were taken out to make room for restaurants because they were becoming an eyesore being empty every year.

The new 38,000 square-foot construction will be considerable renovations to the right field upper deck and concourse where empty seats will be replaced with a party deck. Included will be an homage to our Mile High city with the 5280 Craft Bar that will be 52’ by 8” and will feature 52 taps of Colorado beer. 5280 Craft Bar will include two restaurants, Oskar Blue’s CHUBurger and Tavern Ballpark. Seating near the Rooftop start at $14 with a $6 concession or merchandise credit.

The views from the rooftop upper right field deck will be stunning. Plus what is more American than baseball, food and beer? Add in some beautiful Colorado views and the next hundred years looks pretty good. Now let's GO ROCKIES!

Want to get closer to the action?
Maybe consider moving to the thriving Ballpark neighborhood!