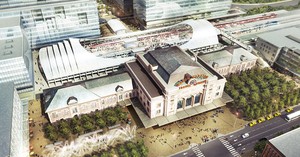 “We design, draft and attach the precast façade, the exterior of the building which is a concrete wall system that hangs off the main structure,” explains Kevin Potts who is a draft and detailer and co-owner of Denver West Design, a precast concrete design and detailing firm. “Colorado is big on precast concrete.”

Denver West Design has been contracted by Rocky Mountain Prestress for the Union Station Project. “We do all the design phase. Rocky Mountain basically has all the labor and equipment. They are a sub of the contract, manufacturing the precast, we are hired for the designing and detail following an architect’s drawing. We do structures too, but we build each piece at a separate plant and ship it and stack pieces, like a tinker toy that we build, design and hang each piece.”

Denver West Design has been around since 2005. Many of the people Denver West Design contracts to help them, were employees for the Rocky Mountain Precast who were either laid off or quit. The company was started by two friends of Kevin and his partner who once were also employed by Rocky Mountain Precast but who went on their own. They did well; then, the recession hit and their friends of 15 years had to get jobs. Kevin and his partner came into the chance because they were let go by Rocky Mountain Precast. The company was pretty much handed to them two years ago. “He emptied the check account, handed over the older computers. It worked out well and we owe these guy. Someday.”

The structure of Denver West Design is two guys making their own, but working under the S Corporation tax breaks, contracting under a corporation, but working individually; unlike many precast who work from home. Overhead is minimal with each splitting rent, electricity, utilities. It’s a good format and the way of the future where five people work, each an individual seeking out their own way under the Denver West Design umbrella and sometimes sharing the labor of a larger project.

“You do work 60, 70 hour weeks when you have work, because you take it. So you do end up working harder, but you can take vacations when you please. Right now we are turning down work, our backlog extends six months and other precast companies are also backlogged.”

But there’s no security, next year there may not be any work. The market is still very volatile.  But this year’s got plenty of work and Potts is saving for the rainy day.

“Our business has increased 50 percent. The company is a single worker project. There was a big jump in business, as much as we can handle. Two people is enough for now… to hire would require a major contract.”

New Era Realty is excited to find you a place in the Union Station Building, but don’t wait until 2015.