Denver’s Reach for the Skyline 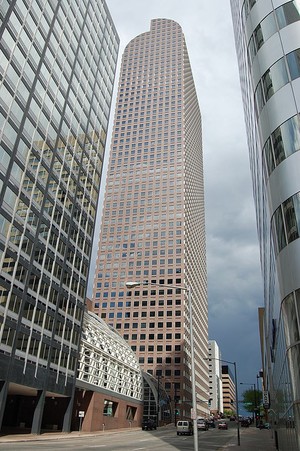 According to Denver-Cityscape.com, Denver’s Central Business District, which encompasses about 34 million square feet of commercial and government office space is the largest in the area. Almost 130,000 people work in downtown Denver while about nearly 10,000 people live in the area. There is no other greater office district in a 600 mile radius. Denver’s Central Business District has more than 3 million square feet of retail space and nearly 5,000 residential units and still growing.

Denver began to set its sights in the skies pretty early in its history, beginning with the Equitable Building. Built in1892 the heavy, nine-story, brick and mortar building, adorned in Romanesque arches, ionic Roman columns smacks of its era. Sandwiched between the light and slender glass skyscrapers, the Equitable Building is squat and cumbersome, but it remained the tallest building until 1910 when the Daniels & Fisher Tower, better known as the 16th Street Clock Tower, was built. The Daniels & Fisher Tower was not only the tallest building in Denver, for a time it was the tallest building between Mississippi and California. The architectural style jumped a few centuries, too, reflecting the 14th century Palladio architecture that dots the majority of the Veneto region of northern Italy. It remained the tallest building until the 621 17th Street building, formally known as the First Interstate Tower South, was completed in 1957. The First Interstate Tower South remained the tallest for a decade to be replaced by the 1600 Glenarm Place building.

From then on, as soon as one building reached the highest, another replaced it some 25 times—a Babylon of sorts. The 1980s stood out as the decade of decadence and the birth of Denver’s most infamous building, the One United Bank Center, later renamed the Norwest Plaza and today renamed the Wells Fargo Center completed in 1983. Known as the Cash Register building, the Wells Fargo Center, which stands at 698 feet with 52 stories, was a watermark because it was designed by the famous architect, Philip Johnson who was credited with kicking off America’s modern architecture. Many more famous architects would come to plant their styles and names in the city, but the Johnson’s Cash Register building became the definitive mark in Denver’s skyline. Even though the Republic Plaza, the tallest skyscraper in Denver at 714 feet, and the CenturyLink Tower at 709 feet would surpass the height of the Wells Fargo Building, the Cash Register remains taller than the two, because it sits on a hill.

To date, the Tabor Center Tower Two on 17th and Larimer Street is being proposed by Callahan Capital Partners with Kohn Pedersen Fox as its architect. The 630 foot building will hold 43 stories and is an 830,000 square foot office mammoth. It will be the largest development in Denver since 1985.

The drive to build higher obviously comes from the soul of a growing city. As we move through the Great Recession, downtown Denver’s Central Business District continues to expand, not so much outward, but upward. If you’re interested in reaching the skies, contact the New Era Group.