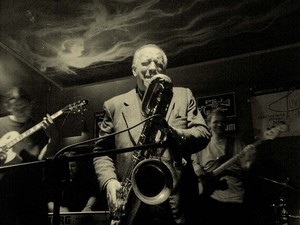 When you think of jazz, New Orleans obviously comes to mind. But Denver also played a pivotal roll in jazz’s history. From the early 1930s, jazz has been a fiber in the knitting of Denver’s history. Of course, Five Points is a major factor in all this history. A predominately black neighborhood, Five Points allotted hotels like the Rossonian and Benny Hooper’s Casino, the Rainbow Lounge and Lil’s that gave a place for the early black jazz musician to stay. But their playing didn’t end when they left the white clubs. The real jazz began in those late night sessions in Five Points. These became the launching places for bebop and hard bop. Those after-hours sessions became well known and allured more jazz musicians to play in Denver. That jazz development in Denver continued to evolve into the R & B with names like Louis Jordan and Charlie Brown.

Denver’s demographics also may have played a roll. Moving across the country, Denver became a good stopping point for those long trips west or east heading from and to St. Louis or Texas. One of the first jazz big names to play in Denver was Benny Goodman who played at Elitch’s in the 1930s.

Such is the influence of jazz in Denver that we have great icons like my friend Carlos Lando. Carlos is the program director of Jazz89 KUVO(89.3 FM), the long standing number one jazz station in the nation. Icons like Carlos Lando are not to be brushed off. Lando has spent over 30 years accumulating interviews with the greats like Count Basie, Dexter Gordon, Betty Carter and countless others. He is a walking, breathing bible of jazz living in Denver.

Carlos Lando and KUVO are contemporary testaments to Denver’s long history that began to take off in the late 30s and 40s and was in full swing by the 1950s as Jack Kerouac documented in his book, On the Road. Miles Davis, Billie Holiday, Duke Ellington, Nat King Cole all played in Denver. Today, the residuals of that era can be found all around us with events like Five Points Jazz Fest, Jazz in the City and Jazz Fest Denver. And with clubs like Dazzle, the historical Chapultepec featuring contemporary jazz greats like Pat Bianchi, Ken Walker and the Sextet, Convergence, Hugh Ragin, Chie Imaizumi, 9th & Lincoln Orchestra, the Denver Jazz Orchestra, Ultraphonic and Dianne Reeves, Denver’s improvisational roll continues to be felt.

So if you’re looking for a home with color and history, ask New Era Realty about their list of homes in the Harlem of the West, familiarly known to us as Five Points.