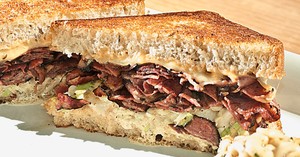 If you haven’t heard yet, that great deli, Master Piece Delicatessen, is opened for business in downtown Denver. The new location at the Wells Fargo Center, at 1710 Sherman Street is way bigger, two-and-a-half times the size of the original deli on 1575 Central Street. The new store has a real kitchen with a walk in cooler and all those things that a real restaurant has. The new location can be rented out at night to groups of 50 and under. If you’d rather have your party at home, well, the new deli allows for catering. The new store will continue its lunch box delivery all over the greater Denver area and as far as Colorado Springs, as well as an addition of a delivery driver who will deliver their regular sandwiches within a one mile radius.

“Soon after we opened the first Master Piece,” Chef Justin Brunson explains, “we knew there was going to be a second, but we just didn’t know when it was going to happen.”

The two young chefs, Justin Brunson and Steve Allee began in the kitchen of the now defunct Lancer Lounge. The space was cramped to say the least, but it was a launching pad. Not even a year later, the deli opened its doors at the Center Street location. With hot plates and some ingenious maneuvering, the cramped little deli began to pack customers.

“It’s the same menu but the difference is the décor and the size. With three terminals we can get people through much faster. At the original deli we are slowed down by the bottleneck from the lines, the small cooking area and one register to work from. We would add to the old store, but there’s just nowhere to put it. Using hot plate vs gas at the new place is also an extraordinary change.”

And people have definitely been coming in to see the new deli, doing twice the business than the original location right off the bat. Of course, with so many offices having 40,000 employees within 40 blocks helps. Though it was difficult opening up during the holidays, Master Piece is looking forward to the spring business. But the Uptown store is just one of many to come. The duo plans to open several more stores throughout Colorado within the next five years.

“We did it to get our food out there for more people, to create jobs and more business; all those great things that come with opening a business.” Concluded Chef Justin.