The New Stadium District in Denver 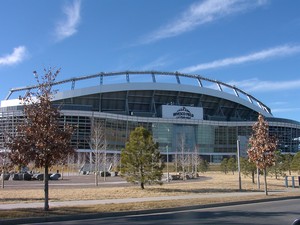 We have to share a little bit of news with everyone… or maybe we should say forecasting. The area around most cities where the stadium is located tends to be a thriving center of restaurants, pubs, and condos.  For Denver that hasn’t happened yet. But that may be about to change.

Sun Valley is going through a major redevelopment being led by some super savvy urban planners, architects, designers and possibly developers.

The Decatur Federal station is up and running and as a part of that project there is also a redevelopment being designed for that neighborhood. Here are so many reasons why this area is desirable, and here are a few of the reasons:

It's in the riverfront area
You remember years ago when Riverfront Park was open fields and train tracks.  Now it is a thriving center of restaurants, green space, and some of the most beautiful condos and lofts in Denver.  Sun Valley and the area around the Bronco’s stadium shares riverfront appeal along with the trail system for running, biking and fun.

The views are incredible!
If you go into Sun Valley or the area around the stadium you will notice that it slopes upward giving residents incredible views of the Downtown skyline.

Perfectly situated
This neighborhood has a great location within a mile of LoHi, Jefferson Park and of course easy access into the Downtown heart of Denver.

It’s affordable
Projects in Jefferson Park have been popping up like crazy and soon those projects are going to begin appearing in Sun Valley as well with the new landscape of streets and the great design the planners have in store.  We are speculating on what will be developed and only the design team and developers know for sure.

The Next Hot Spot in Denver

If the density of this hip and growing area begin to take root it may very well be the next Lower Highlands style favorite spot.  When folks ask what is next to “Pop” (a term folks seem to love to use) or the next undiscovered gem in Denver’s Real Estate Neighborhoods we have to mention three words you should look at.

Of course we are coining the term Stadium District… but we think that is what this area around our beloved Broncos (and the high scoring Peyton Manning) will soon come to be known.

And see the Stadium District Twitter page to stay up to date.

Learn more today by calling anyone on the New Era Realty team.